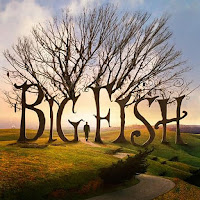 Film Series: Watching Big Fish Next to My Mother in the Hospital

Now, this is an interesting coincidence, as I was watching “Big Fish” on Amazon Video whilst visiting my mother during her last week in this world.  I was summoned to Portland by my physician brother who told me that my mother was dying.  She had been ill and we expected her to pass a year ago, but she rallied and was discharged from hospice.  But now, she was having another heart attack and we had decided that with her progressive dementia and renal failure, she would not undergo dialysis.  We had this discussion with her before the first heart attack and she had agreed with the plan.  She was lucid enough to understand the consequences of this decision.  As she became progressively more demented, we confirmed with another discussion.  She felt that her life was complete and she was ready to go.  My father had passed away 6 years ago, and most of their friends had died.  She had suffered increasing dementia, complete deafness and renal failure.  She was struggling to maintain her dignity with loss of control of her life and basic bodily functions.  The heart failure was going to be the last straw.

I watched the movie whilst she was sleeping and was actually surprised that there was not much discussion about this kind of stuff in this movie. This is a story about a young man who is coming to terms with the tales that his father told him when he was young.  The son thought that the stories were just that, stories, and he did not respect his father as he perceived them as lies.  Towards the end of the movie, he finally comes to terms with his father’s identity through these stories, which were at least partially true and perhaps a little exaggerated.  His father then dies and becomes the “Big Fish” that haunts the waters of the local river.  Was it symbolic that the fish got away?

So was this intentional, leaving out the elephant in the room.  It was implied through the whole movie that the father was dying.  He did not talk about his feelings, his love, legacy and his wishes for the living.  They certainly did not talk about invasive therapy and life support.  Maybe, if they did, no one will watch the movie.  At any rate, it seems like such a different death than the one I was witnessing.  We discussed all these things as a family with my mother.  She also had lived an amazing life, surviving the Japanese occupation in China, the communist takeover, decades in the Middle East and watching her children vanish into the West, another “Big Fish” story, but this one did not get away.

Written by Jane Lombard, MD, MBA a board member with the Center for Practical Bioethics.

From reproduction to end of life, bioethical issues affect all of us. What better and more fun way to think about them than film? The Center for Practical Bioethics is thrilled to partner with the Tivoli Cinema in Kansas City to present the Bioethics Film Series featuring three iconic films. Following screenings at 7:00 pm, Center staff will lead discussion of each film’s major themes. Tickets may be purchased from the Tivoli in advance or at the door (Adults $9, Students $7)