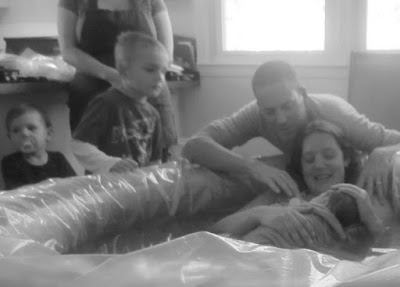 Home Birth, Hospital Birth, and the Myth of the Good Mother – Reflections from a Bad Mother

In the eyes of many, I started out in motherhood as a bad mother. I decided to birth my first child in a free-standing birth center with a midwife instead of at a hospital with a “Level 3 NICU” (as I’ve often seen advertised to pregnant women).Things only got worse from there.

I chose to birth my next two children at home. My daughters were born in our dining room in the presence of their siblings, grandparents, and great-grandparents.

I did a lot of research about place of birth before choosing to have my babies outside of a hospital. Ultimately, I decided that I was more likely to emerge from the transformative experience of birth physically and emotionally intact if I avoided modern obstetrics practice.

But I think it’s fair to say that the popular consensus is that my choices were irresponsible at best and selfish at worst.  Irresponsible because the place of birth study that has gotten the most popular press attention is the Wax Study which purports to demonstrate a statistically significant increased risk of neonatal death in home births. And selfish because the dominant cultural narrative around motherhood is one of sacrifice. Mothers are expected to sacrifice their own interests for their children. In choosing home birth, in part to protect my own health and in pursuit of the birth experience I wanted, I flouted this sacrificial requirement of mothers.

My lecture on March 8th will explore some of the pressing ethical question that arise when women exercise autonomy in ways that resist the professional medicalization of pregnancy and birth and defy traditional gender stereotypes about maternal sacrifice:

• What makes a good mother?

• How are women’s choices shaped by cultural understandings of who makes a good mother and what good mothers do?

• How are these cultural narratives reinforced in obstetric practice?

• How should decisions about birth be made? Who should make them?

I’ll discuss how bioethics can help sort through questions like these and provide clarity in matters of life and death.

Leslie McNolty is a Program Associate at the Center for Practical Bioethics. She received B.A. degrees in Philosophy and Political Science with a Secondary Degree in Women’s Studies at Kansas State University before taking her M.A. in philosophy from Rice University in Houston, TX. Currently, she is completing a doctorate in bioethics from Albany Medical College. She teaches in the philosophy department at the University of Missouri-Kansas City and in the bioethics department at the Kansas City University of Medicine and Biosciences.